Sleeves up and hands on – workshop at interior fitter Lotus Cabinetry

The Californian family business counts on the support of SCHULER Consulting for production optimisation. 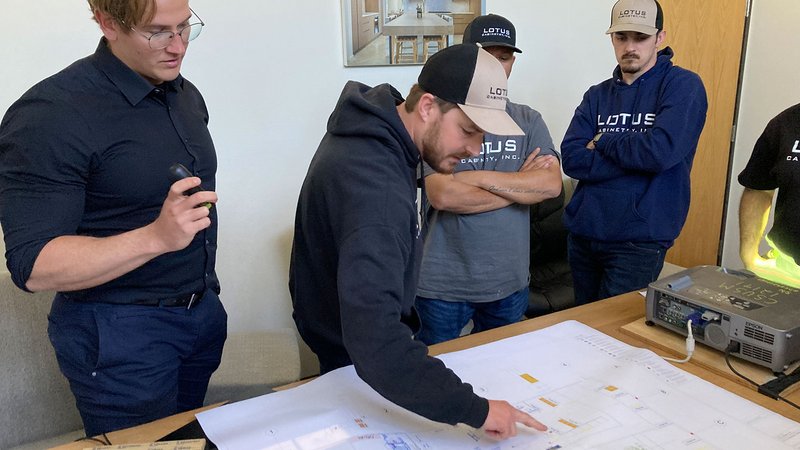 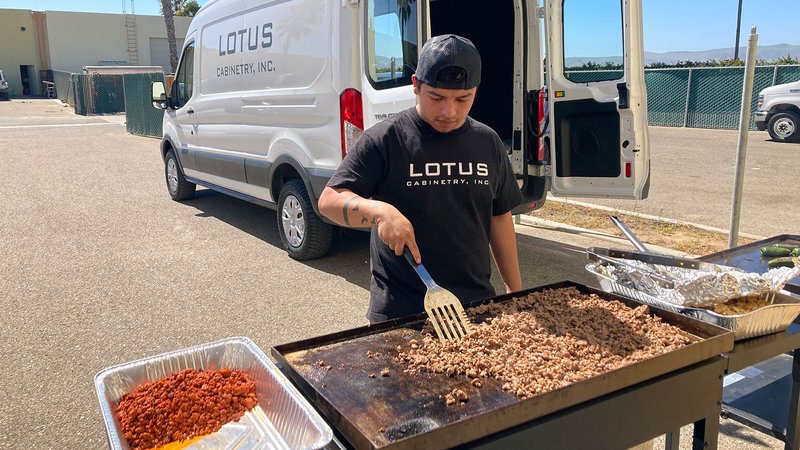 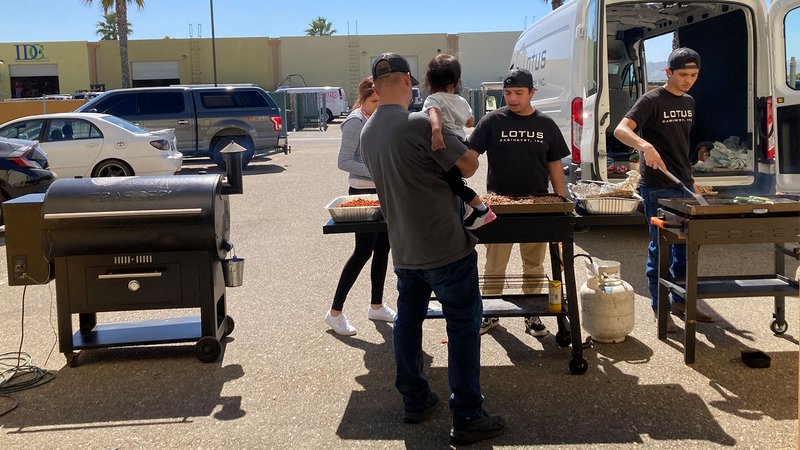 In the joint project, the current production at Lotus Cabinetry Inc., CA was optimised and a new production was planned. The ideal layout can be implemented in several steps.

Lotus Cabinetry Inc. from California is active in luxury interior fittings and the production of corpus furniture. The family business was founded in 2016. Several generations of the 35-employee company are partners in Lotus Cabinetry.

Here, everyone pitches in!

Life and work go hand in hand in the multi-generational company. After the workshop on factory planning with SCHULER Consulting, a barbecue was served, which our team was very happy about.

Members of the Lotus team and our consultants Martin Kintscher (on the right) and René Hanuscheck (second from left) in the production area. The family business will switch to a dowel construction and corpus press in the future.

Based in Santa Barbara, California, the family-run company Lotus Cabinetry has found its place on the market as furniture manufacturer for high quality products. The company was founded in 2016 by Joseph Franklin and Genaro Jacinto. Here, 35 people work jointly on realizing luxurious interior fittings for residential as well as commercial purposes within the Santa Barbara area.

The young family business is already preparing for the coming growth today: They teamed up with SCHULER Consulting to create an individual roadmap for future developments and held a workshop to see which optimization potentials lie hidden in today’s production that might enable short-term growth. „We are planning on expanding, and we have ideas on how to do it, but we wanted an expert opinion and to see different ways that we are not thinking about”, Joseph Franklin states on why they chose to work with the Consulting team.

When analyzing the potential of today’s 11.000 sqft production, first steps for immediate optimization were defined: First, a restructuring of planning processes based on dowel design and second, a reorganization of the assembly area in the production with a corpus press. These changes allow an automated assembly of corpus furniture and thus increase the overall output significantly. Furthermore, with a corpus press, the design of the furniture pieces improves through eliminating visible fixtures.

In addition, in the 7-day workshop the project team worked out an ideal layout for a future production, as well as a roadmap consisting of various implementation stages. The first step – optimization of today’s production – has already been completed. Following, Step 2 consist of integrating new machinery in the current production layout and concluding, step 3, constructional modifications for an optimized material flow.

Ready for a bright future ahead

The strategic part to prepare for the future growth is now done. “We liked the on-site and hands on approach of the SCHULER team. Also, the data that we received in the end was very valuable to us”, Franklin sums up the workshop. Lotus Cabinetry has set its course to a bright future ahead. In doing so, it focuses not only on a high level of customer orientation, superior product quality and state-of-the-art production technology, but also on what makes the furniture manufacturer so special: family cohesion. Here, everyone pitches in - a mentality that particularly pleased our team when the barbecue was fired up after the workshop and everybody came together to enjoy the meal.

We use cookies on our website. Some of them are essential, while others help us to improve and operate our online offer for you economically. You can "Accept" this or click on the "More information" button to select which cookies we may use.