Digitalisation in the compressed air technology

The term Industry 4.0 is a commonly used buzzword these days, often without knowing what is really behind it. So what exactly does this term include and what are the opportunities for the compressed air industry? 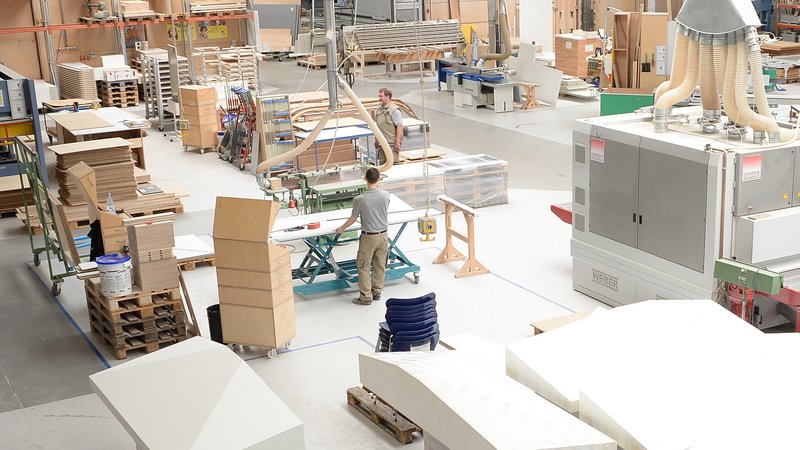 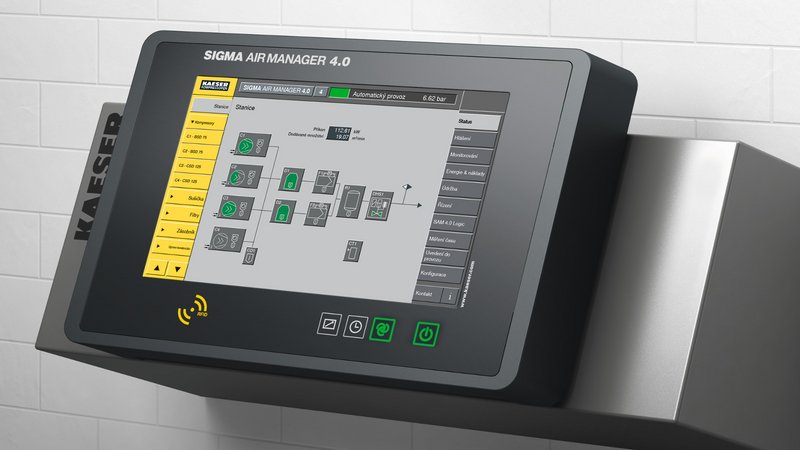 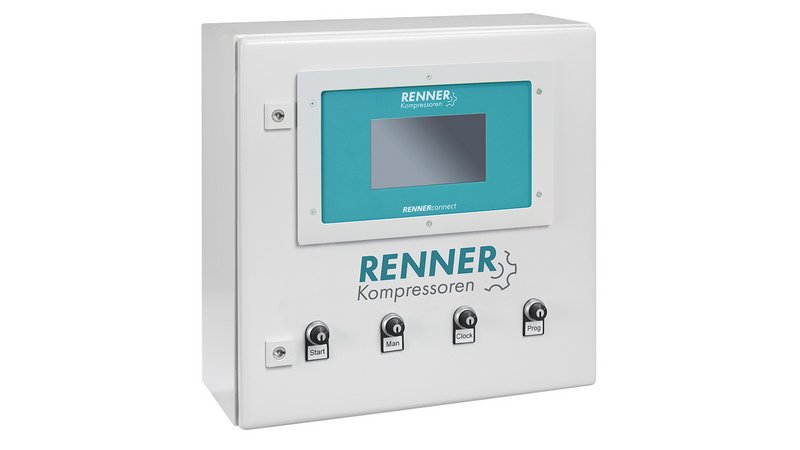 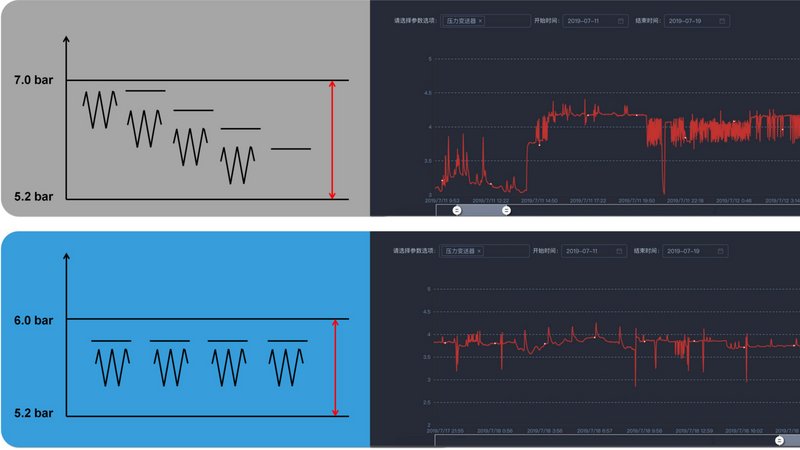 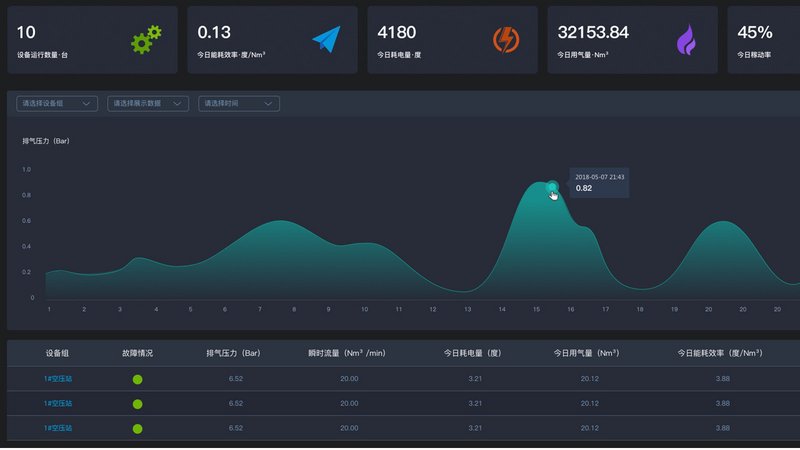 Moser GmbH trusts on the Air Control from ALMiG compressors

Course of the compressed air flow in a traditional controlled and a cloud-controlled system of the Taiwanese manufacturer DYNA.

An integrated monitoring function makes it possible to collect data from all installed sensors.

The following article describes the current state of the art of digitalization in compressed air technology. It does not claim to be complete; there are certainly many other manufacturers who can offer customers similar or identical technologies. However, in order not to go beyond the scope of this article, the focus is on manufacturers whose systems are frequently used in the woodworking industry. The generation of compressed air has always been a major cost driver in manufacturing. Depending on the type and condition of the system, it is estimated that between 25 percent and 35 percent of the total energy used in a company is consumed. When considering the life cycle of a new compressed air system over five years, energy consumption accounts for around 80 percent of the total costs, while the initial purchase costs account for only about nine percent of the costs. This high energy consumption can be significantly reduced by retrofitting or modernizing the system and components, the right system design, improved control and targeted maintenance. Since modern compressors are highly energy efficient and well-designed ring line systems offer little potential for energy savings, suppliers are increasingly focusing on optimizing the control of compressed air systems.

A digitalised control system brings many advantages and enables far-reaching efficiency-enhancing measures to be taken. In addition to reducing energy consumption and controlled self-optimization, a form of "predictive maintenance" can be implemented with the help of sensors. This is made possible by collecting data and evaluating them. On the basis of this evaluation, preventive maintenance measures can then be derived, which significantly reduce the probability of failure. Only this possibility puts the technology in the context of the "Industry 4.0" vision, since different states are used and processed by sensors. In this way, both possible problems can be communicated in real time and energy consumption can be significantly reduced, which is becoming more and more the focus of companies in the manufacturing industry. One of the world's leading manufacturers of compressors and a pioneer in the field of digitalisation is KAESER KOMPRESSOREN, based in Coburg, Bavaria. The company looks back on a hundred years of company history and offers the "Sigma Air Manager 4.0" compressed air management system as a digital solution. This is a central control system that adjusts compressed air output to actual demand. The system constantly analyses various parameters, such as the relationship between switching and control efficiency, and uses this information to calculate a loss-free schedule for the system in advance. The consideration of different conditions such as reduction of the average total pressure. The processing of these states ensures a significant reduction in energy requirements, as the compressed air is generated completely according to demand and overproduction can be avoided. The entire plant is visualized in a pipe and instrument flow diagram and provides the most important parameters of the plant via a display. In addition to the pressure curve and parameter display, the current pressure consumption, historical values and energy costs can be displayed. Furthermore, all collected data can be stored in the cloud (KAESER, Sigma Smart Air). This allows experts to perform remote diagnostics and identify preventive maintenance measures, as well as offer appropriate services or spare parts.  In total, the system can monitor up to 16 compressors, and collected data can be retrieved in real time from any network-compatible terminal, regardless of location.

ALMiG Kompressoren GmbH is another company with a long tradition and an equally 100-year history. This company relies on the modular "Air Control" system to manage and monitor the entire compressed air supply system. Moser GmbH in Haslach, Baden, which is located between Offenburg and Freiburg, uses precisely this technology in its production. The company produces windows and doors as well as high-quality interior fittings. Enormous quantities of the expensive medium compressed air are used, especially in the field of interior fittings. This is mainly done in the area of surface treatment. Dust and fine chips have to be blown off in the grinding process, while all valves and cylinders of the machines are also controlled by compressed air. Compressed air is also an important medium in the downstream painting process: Both cleaning and pre-treatment as well as the actual painting process require large quantities of compressed air. "In view of the constantly rising energy costs, we therefore want to examine exactly where we can reduce them," explains Managing Director Thomas Moser. The operating pressure of the digitally controlled system is infinitely variable from five to 13 bar. "In the start-up phase, we run each machine at a pressure of eight bar and reduce this by 0.1 bar until we are at the optimum. Because one bar accounts for about seven percent of energy costs," says ALMiG area salesman Volker Gräschke. Thanks to the "Air Control" system, the compressors are controlled according to consumption and can therefore be operated much more energy-efficiently at constant pressure. "If consumption increases towards the maximum delivery volume of a system, a second compressor is switched on. A speed reserve is maintained so that no pressure fluctuations occur when the compressors are switched on and off, and the station runs economically," explains Gräschke. During the main production period, therefore, two systems run synchronously at the same speed. In the low load phases, when production is lower, only one compressor runs. This automatically adapts to the consumption profile. "We will be able to save considerable energy and operating costs per year", Moser is convinced.

Companies in Germany can also receive a subsidy for energy-efficient compressors - this is a subsidy from the BAFA (Federal Office of Economics and Export Control). Beside some other manufacturers the company RENNER GmbH Kompressoren offers products, which correspond to the criteria of the Federal Office. Depending upon need compressors are offered, which are administered and optimized over the over ordered control "RENNERconnect". Similar to the solutions described above, "RENNERconnect" enables extended system pressure monitoring. This ensures the greatest possible energy savings (up to 40 percent) by avoiding expensive idling times due to load/idling switching cycles, pressure optimisation and maximum pressure reduction. Furthermore, numerous additional components of the compressed air system such as dryers, separators, dew point sensors and additional pressure sensors can be integrated and monitored. The intelligent networking of the components enables communication between compressed air generation and treatment as well as their optimum coordination for maximum efficiency. With the help of a web server, in addition to real-time access to data, a comprehensive package of online evaluations, for example of running behaviour, an energy and cost calculation and many other parameters, is offered.

The advanced digitalisation of compressed air technology can thus be observed at many manufacturers. The customer is thus provided with a relatively simple introduction to the digitisation of the compressed air production process. This digitalisation provides the producer with the opportunity to significantly reduce his energy costs during operation. Representative studies for the direct comparison of different digitalised systems with conventional compressors and control systems are not available at present, so that no clear recommendation can be made at present. However, the digitalisation of compressed air production certainly helps to make an expensive and complex process transparent and controllable.

Author: Marcin Belkot, Master in Production Engineering and Management and working as a consultant for SCHULER Consulting since 2015.

The first step into your digital future

On track for the smart factory of the future

Everyone is talking about digitisation, but is the wood and furniture industry already that far along?

Industry 4.0 in the Furniture Industry – a Snapshot

What does future production look like and what do I have to do to be ready for Industry 4.0?

The opportunities to realize creative consulting approaches are endless

When change becomes an opportunity